Palestine vs. Israel
as the Name of the Holy Land

AN INTRODUCTORY THOUGHT BY DR. HIDALGO

SUCH IS THE CASE WITH A MAN THAT I MET BACK IN 1967, HIS NAME IS DR. THOMAS MCCALL

WHEN I WAS INVITED TO SING AT A HEBREW-CHRISTIAN MINISTRY CALLED BETH SAR SHALOM IN DALLAS, TEXAS, THE SPEAKER THAT EVENING WAS DR. SANFORD MILLS, ALSO A HEBREW CHRISTIAN AND GUESS WHO THE MINISTER IN CHARGE WAS, YOU'RE RIGHT, DR. THOMAS MCCALL

THE FELLOWSHIP WAS MADE UP OF JEWISH AND GENTILE INDIVIDUALS, THOUGH SMALL IN NUMBER WHAT IMPRESSED ME THE MOST WAS THE LOVE AND AFFECTION THAT CAME ACROSS WAS FANTASTIC, AND THE REASON WAS THIS, THE LEADER DR. MCCALL SURELY EXEMPLIFIED THE LOVE OF OUR MESSIAH AND THE MEMBERS SEEMED TO EMULATE HIM

I MIGHT TELL YOU, ALTHOUGH I WAS SAVED AND ENDED UP IN A PRIMARILY GENTILE CHRISTIAN ENVIRONMENT, AND BY THE WAY I WAS EXTREMELY HAPPY AS I PURSUED MY EDUCATIONAL GOAL AMONGST WALL TO WALL GENTILES THAT LOVED JESUS, I KNEW DEEP DOWN IN MY HEART THAT SOMETHING WAS MISSING

THAT SOMETHING WAS THIS, FROM THE FIRST NIGHT I ATTENDED BETH SAR SHALOM, AS A JEWISH BELIEVER, I FELT THAT I HAD ARRIVED HOME AMONGST MY OWN PEOPLE AND FOR THE DURATION OF TIME IN THE DALLAS-FORT WORTH AREA I NEVER MISSED A SATURDAY EVENING SERVICE AT BETH SAR SHALOM

AFTER I GRADUATED FROM THE BIBLE BAPTIST SEMINARY IN ARLINGTON, TEXAS AN INVITATION WAS EXTENDED TO ME BY THE AMERICAN BOARD OF MISSIONS TO THE JEWS (NOW KNOWN AS THE CHOSEN PEOPLE MINISTRY), I STARTED A SOLID SCRIPTURAL PROGRAM UNDER THE TUTELAGE OF MARTIN MEYER ROSEN (A.K.A. MOISHE ROSEN ( EVENTUALLY THE FOUNDER OF JEWS FOR JESUS), THANK YOU LORD

HERE IS THE AMAZING THING, FOR FORTY-SIX YEARS I HAD NO CONTACT WITH DR. MCCALL, UNTIL TWO WEEKS AGO WHEN I WAS RESEARCHING THE SUBJECT OF 'PALESTINE', A NAME THAT I PERSONALLY DO NOT FAVOR BECAUSE OF ITS FALSE ORIGIN

'THE LORD IS GOOD, A STRONGHOLD IN THE DAY OF TROUBLE, AND HE KNOWETH THEM THAT TRUST IN HIM' (NAHUM 1: 7)

SHALOM IN Y'SHUA OUR BLESSED LORD

Palestine vs. Israel
as the Name of the Holy Land 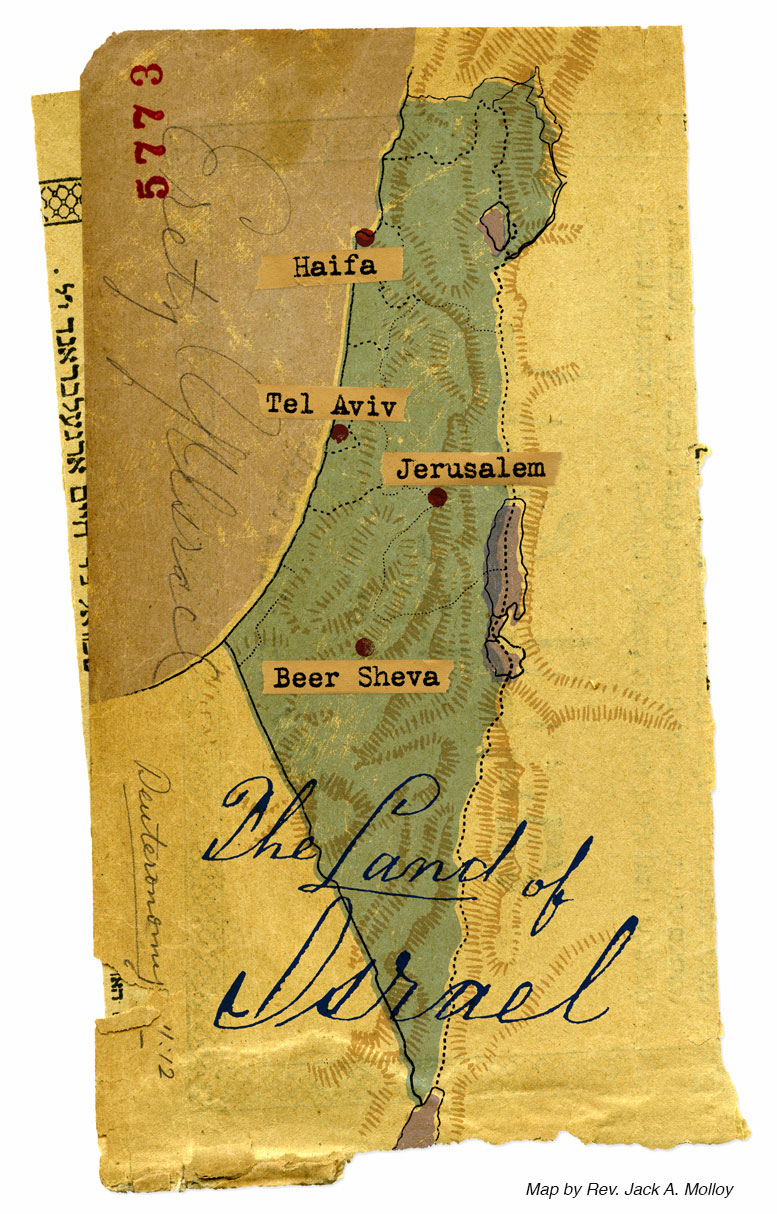 During the last few centuries, the world, Christians included, has fallen into a bad habit. We have bought into some early Roman propaganda. We have used the name Palestine, which Roman Emperor Hadrian placed on the country of Israel in 135 A.D., for so long that it has become common usage. This would be as incorrect as calling the Russia of today the "Soviet Union" or referring to Berlin as "East Germany". The thoughts below by our ministry's senior theologian, Dr. Thomas S. McCall, completely explore the subject. If you know somebody who's fallen into this habit, please share this article with them. - Zola

Current Propaganda's Use of Palestine

There is a propaganda war going on now with regard to the term "Palestine". At one time it might have been argued that Palestine was an innocuous designation of the Middle Eastern area, that is generally thought of as the Holy Land. During the last few decades, however, the term Palestine has been adopted by Arabs living in Israel in the area west of the Jordan River. It is specifically employed to avoid the use of the name Israel, and must be considered an anti-Israel term. In all Arab maps published in Jordan, Egypt, etc., the area west of the Jordan River is called Palestine, without any reference to Israel. Palestine is the term now used by those who want to deny the legitimate existence of Israel as a genuine nation among the family of nations.

The term now adopted by the political entity within Israel that is gradually obtaining more and more pockets of territory through the "peace process", is the PA (Palestinian Authority). Although it must deal daily with Israeli officials, the PA hates to use the term Israel in any of its communications.

Palestine, therefore, must now be considered a political propaganda term with massive anti-Israel implications. The world press uses the term to question the legitimacy of modern Israel. Christians also have used the term Palestine for centuries in referring to the Holy Land. In earlier times this might have been excused (although biblically questionable) because of its common usage. In light of the current propaganda war against Israel, however, Christians must now re-evaluate the term Palestine and consider whether it is biblically, theologically or prophetically accurate.

Biblical Use of Palestine

The term Palestine is rarely used in the Old Testament, and when it is, it refers specifically to the southwestern coastal area of Israel occupied by the Philistines. It is a translation of the Hebrew word "Pelesheth". The term is never used to refer to the whole land occupied by Israel. Before Israel occupied the land, it would be generally accurate to say that the southwestern coastal area was called Philistia (the Way of the Philistines, or Palestine), while the central highlands were called Canaan. Both the Canaanites and the Philistines had disappeared as distinct peoples at least by the time of the Babylonian Captivity of Judea (586 B.C.), and they no longer exist.

But when they persecute you in this city, flee ye into another: for verily I say to you, Ye shall not have gone over the cities of Israel, till the Son of man shall have come. (Matt. 10:23)

The first passage is when Joseph, Mary and Jesus returned from Egypt to Israel, and the second has reference to the proclamation of the Gospel throughout the Land of Israel. Jesus, Matthew and the angel speaking to Joseph use the term Israel with reference to the Land, even though the term was not then recognized by the Roman authorities.

It is clear, then, that the Bible never uses the term Palestine to refer to the Holy Land as a whole, and that Bible maps that refer to Palestine in the Old or New Testament are, at best, inaccurate, and, at worst, are a conscious denial of the biblical name of Israel.

History of the Term Palestine

Where did the term Palestine originate from? How did the world and the church get into the habit of calling the land of Israel "Palestine"? One of the guides we use in our tours to Israel is Zvi Rivai, an Israeli Messianic believer, who has done considerable research on this subject. Zvi informs us that before 135 A.D., the Romans used the terms Judea and Galilee to refer to the Land of Israel. When Titus destroyed Jerusalem in 70 A.D., the Roman government struck a coin with the phrase "Judea Capta," meaning Judea has been captured. The term Palestine was never used in the early Roman designations.

It was not until the Romans crushed the second Jewish revolt against Rome in 135 A.D. under Bar Kochba that Emperor Hadrian applied the term Palestine to the Land of Israel. Hadrian, like many dictators since his time realized the propaganda power of terms and symbols. He replaced the shrines of the Jewish Temple and the Sepulchre of Christ in Jerusalem with temples to pagan deities. He changed the name of Jerusalem to Aelia Capitalina, and changed the name of Israel and Judea to Palestine. Hadrian's selection of Palestine was purposeful, not accidental. He took the name of the ancient enemies of Israel, the Philistines, Latinized it to Palestine, and applied it to the Land of Israel. He hoped to erase the name Israel from all memory. Thus, the term Palestine as applied to the Land of Israel was invented by the inveterate enemy of the Bible and the Jewish people, Emperor Hadrian.

It is interesting to note that the original Philistines were not Middle Eastern at all. They were European peoples from the Adriatic sea next to Greece. It may have pleased Hadrian to utilize this Hellenistic term for the Jewish land. In any case, the original "Palestinians" had nothing to do, whatsoever, with any Arabs.

Christian Adoption of the Term Palestine

One of the first Christian uses of the term Palestine is found in the works of the Church historian Eusebius, who lived in Caesarea. He wrote around 300 A.D., as the Roman persecution of Christians was ending and the Emperor Constantine began to accept Christianity as legal. Eusebius did not accept Hadrian's designation of Jerusalem as Aelia Capitalina, but he did use Hadrian's term Palestine. Eusebius considered himself to be one of the bishops of Palestine. Thus, the anti-Israel, anti-Christian name of Palestine was assimilated into the Church's vocabulary as the Byzantine Empire was being established.

The Church has, since that time, broadly used the term Palestine in literature and in maps to refer to the Land of Israel. It should be noted, however, that the Crusaders called their land the Kingdom of Jerusalem. When the British received the mandate after World War I, though, they called the land on both sides of the Jordan River, Palestine. This became the accepted geo-political term for several decades, and those who lived in the land were called Palestinians, whether they were Jews, Arabs or Europeans.

Even evangelical Christians who believe in the future of Israel have used the term Palestine. The New Scofield Reference Edition of the Bible has maps in the back entitled "Palestine under the Herods". There never was a Palestine under the Herods. This is a serious misidentification. It would be something like looking at a modern map of Texas and having it titled "Mexico in the Twentieth Century".

The MacArthur Study Bible published just last year contains a map called "Palestine in Christ's Time" There are numerous references in the notes to something called first-century Palestine.

It appears that Bible-believing Christians have either knowingly or unwittingly followed the world, pagans and haters of Israel in calling Israel by the anti-Israel term Palestine. It is found throughout Bible maps, Bible commentaries and textbooks.

Reprinted with permission from Zola Levitt Ministries, Inc. and www.levitt.com Map by Rev. Jack A. Molloy

PEACE
IS AN ENGLISH WORD THAT MEANS
SHALOM

Visit Google Translate to read our website in your own language